Autumn has come to the US but the weather seems about the same here in Quito, although slightly warmer and more sunny of late. October is supposed to be the start of the rainy season but I think climate change has messed with that pattern. We love our house but like most houses here, it doesn't have central heating and is cold on the rainy/cloudy days.

So, what have we been up to? We've been back from R&R for just as long as I was gone. It was really wonderful to be back in the States which made us realize how much we miss Seattle and the ease and simplicity of life there. I think we'd be itching to go somewhere if we lived back in the States but I am feeling more and more like I'll be ready for a stateside tour in the next couple years.

We rented a small house on the north side of Seattle near NSCC and it was a great location and the perfect arrangement for my month in town. I stopped to see my folks in Baton Rouge and they had a great time seeing Lillian. Then Lillian and I spent a few days traveling around the Seattle area visiting friends & family and soaking in Seattle in the summer before the rental house opened up. Many thanks to the MacAleer/Berliner, Drury and Fontana families for their hospitality.

Traveling on my own with Lillian was a great reminder that I can get out and about with the baby. I think I get stuck in a rut here in Quito since Tristan and I share a car and I'm really bad with directions and therefore don't like driving here. Lillian was a trooper dealing well with nap disruptions and changing schedules and locations. We spent a good amount of time down at our Columbia City house redoing the front landscaping and contemplating a plumbing overhaul. I should have taken before and after pics, but I think it looks nice and Lillian and I had a nice time going to Swanson's Nursery and looking at all the pretty plants.

August also marked the end of the restrictive diet I'd started to try to rule out Lillian's food intolerances--I was down to chicken, turkey, pork and veggies with only onion and garlic as condiments. She started eating solids well and her GI issues subsided when she hit 6 months gestational. Our Seattle pediatrician wanted me to stay away from dairy & soy products until she was 9 or 10 months old, but I asked if I could at least have a croissant from Cafe Besalu (best cafe in Seattle!) and she said she couldn't deny me that. So, when Tristan arrived, I enjoyed my first bites of dairy since Easter and it was heaven! I'm back to eating almost everything except citrus and tomatoes which I think were the actual culprits in all this so life is looking up. As someone who truly enjoys food and enjoys life through cooking and dining out, this was a pretty depressing couple months.


We took Lillian on her first camping trip to Dungeness Spit State Park and went hiking in Olympic National Park. It was really nice to get out in the mountains in WA state and start to enjoy those things with her. She's sitting up and playing by herself and eating lots. Almost 18 pounds and 25.5 inches long as of her 9 month check-up. I think she grew at least 2 inches over the summer!
﻿ 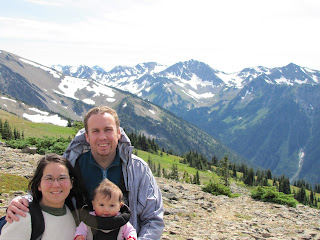 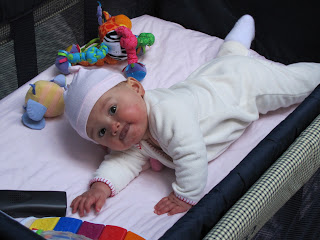 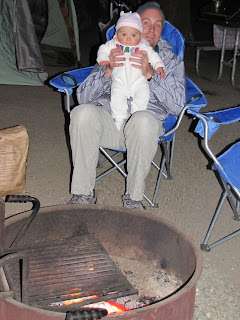 ﻿We shopped, ate well (good cheese and beer which we miss in Ecuador) and generally enjoyed feeling safe. Street crime is such a huge issue here so I think in some ways we were intentionally enjoying not worrying about it--leaving the car unlocked, the stroller in the yard and walking wherever, whenever. I miss sidewalks too. It's hard to get out since I have to wheel the stroller in the street in Quito. We enjoyed lots of good walks and time outside in Seattle. All in all a great R&R and a good end to surviving 6 weeks as a single parent.
Oh, I should mention . . . Tristan did a month long TDY in Baku which was longer than initially planned. I don't plan on being a single parent like that again! Very lonely and hard but proved I could do it. My consolation prize was this beautiful Azeri-Persian rug. I've always wanted a proper rug, a very grown-up purchase! 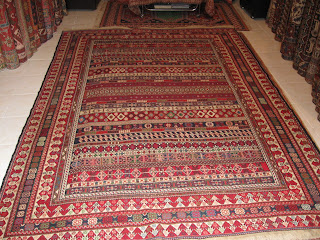 The exciting news this month was the police protests (see previous posts) over wages and benefits. The state run media called it an anti-democratic action. Some said the US was involved which led to an interesting conversation with Senor Pacho who I buy organic veggies every week from at the La Floresta market. Super nice guy, educated in the states, active in organizing farmers, fluent English speaker who loves connecting with the expats who buy from him. He seemed to infer that might have been the case and that he likes being in Ecuador instead of the US as he felt there are things you learn about the US when you live there--kind of all that glitters isn't gold. Latin America has plenty of history to base its suspicions about our actions but this wasn't one of those occasions. People I talked to also weren't too thrilled with Correa and didn't seem sad at the possibility of his early departure. It's interesting to see how different cultures view leadership. In Russia, strength over personal freedoms was more important. Here, change in leadership by force or will of the people seems more acceptable.
The State of Exception has been extended for Quito for the next 60 days. I saw military guarding the TV station but that seems to be the only big difference so far. Otherwise, we're hoping to do some more traveling between now and the end of the year. It's bidding season which seems like more stress than it should be and hopefully we'll have an update in the next few weeks.
Until then!
Posted by Carolyn and Tristan at 1:43 PM