Russia held Duma (like Congressional) elections yesterday. The city seemed quiet when we took an afternoon walk (it was freezing cold) during which I received a text message reminding me to vote "Vazhna dlya strani". It's important for the country.

Well, as we all expected, Putin's party came out with a significant majority. Russian friends said they weren't voting when asked because it didn't make a difference. We watched CNN International broadcast their program "Czar Putin" all weekend which was interesting but extremely slanted and failed to explain why Russians are attracted to the strength Putin provides despite the lack of freedoms. Life after the breakup of the Soviet Union was difficult to say the least. Freedom didn't bring economic prosperity here --it brought crime, hunger and low pensions. CNN just made Russians sound crazy and scary for voting for Putin. 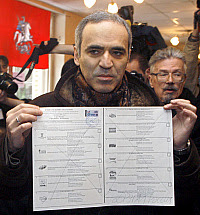 Sergey Ponomarev / AP
Garry Kasparov holding his ballot with all the parties crossed out Sunday.

Kasparov, former chess champion and now political activist, was released from jail in time for the elections.