While our family's medical adventures have taken up most of May, there's been other things going on here in our little part of the equator. The most interesting has been the transition to Pico y Placa, also known as Quito's attempt at controlling the increasingly bad traffic. If you've ever spent some time in central London, you will understand the general attempt. The amusement is that this is the developing world and that puts a whole new spin on the plan. There didn't seem to be any attempt or discussion of increased buses or other public transportation. Certainly to many, it seemed a likely opportunity for the police to line their pockets with some cash for those who don't adhere to the rules. Basically, each weekday folks who have plates that end in a certain digit are prohibited from the center of Quito during certain peak traffic hours. Police, taxis, diplomats and the President's vehicle are exempt. Of course, we don't have plates yet (usually takes a year for diplomatic plates--don't ask why) so we have to carry a letter explaining that we are exempt from Pico & Placa. Here's a pic of the informational sign near our house. (probably have to click on it to actually see the explanation) 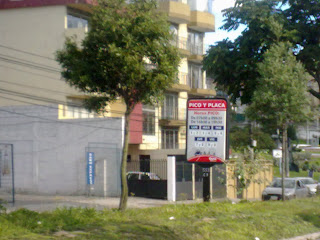 The other significant news is that Secretary Clinton will be on the ground for a few hours on Tuesday. There's a Meet and Greet that afternoon so hopefully I'll have some nice pics to post. I shook her hand years ago when she was the Commencement Speaker at the University of Illinois graduation back in 1994. Now I'll be able to say I've met all three female Secretaries of State. 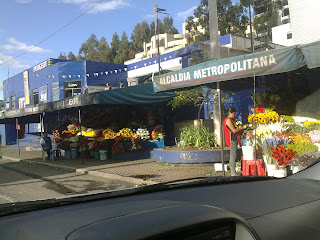 Ecuador is a flower producing country and you can usually get 2 dozen roses for $2. I'm spoiled because we always have fresh flowers in the house. Here's a pic of one of the big roadside stands in Quito.
Posted by Carolyn and Tristan at 2:13 PM

Hi you all, love the new pics and info. Interesting about the traffic control ideas. Did you get to say hello to Hilary?

I’m writing from the team that manages INTERNational Connections, a State Department career networking site for Department interns and employees. We’d love to feature some content from your blog on as it provides some valuable insight into the steps towards joining the State Department and life as a Department employee. If you’re interested in letting use some of your posts, please contact us at internconnect@state.gov ASAP for more information. Thanks!

Hello. I am a Training and Development profession living in the Sierra Nevada Mountains in California.

I am responding to two RFP’s for the Foreign Service Institute for “experiential learning” (ropes courses etc.) in Leadership and Team Building. I can give you the two proposal numbers, one for civil service FS folks and the other for FS Officers, if you wish to verify.

I was wondering if you have a moment to answer two questions.:

Q1: What are the particular challenges of leadership and/or teambuilding that you find in a Foreign Service posting?

Q2: If there were one thing you would like FS Staff to know before a posting overseas about the interpersonal challenges of this assignment what would it be.

One proposal is due Friday 7/30 and the other Wednesday 8/13. I would not mention your comment by name in developing my proposal only by continent: “…from a Foreign Service officer currently serving in Africa”

I am happy to Skype you at your convenience if you don’t feel like putting finger to keyboard.