We've been back in Quito with Lillian for over two months now. It's nice to be settled in our house but I do admit to missing Seattle. Traveling with a baby is certainly different than just the two of us. The question of where the heck am I going to change her diaper crosses my mind more often than it should. The car seems to be a good, reliable place so far, but I've started not worrying about whipping out the changing pad and doing it on the floor of a restaurant with other diners in close proximity.

She's a good little traveler and has done well with the few road trips we've taken. She's not big on Quito traffic, but neither are we. She prefers to be moving, but, thanks to our friend Yuko, is occupied with her toy chimes that hang from the car window.

Lilly's talking (not real words, of course) and cooing quite a bit these days. She finally smiled around 3 months which was right on target for her gestational age of 2 months. She hasn't laughed yet but I'm looking forward to it soon as she smiles with a very cute full body smile (tongue included!). Most nights (unfortunately not last night), she sleeps 8-10 hours in one stretch which certainly helps with the return of our sanity. She started sleeping 5 hour stretches around 10 weeks and has gradually added on over the last 4 weeks. She goes to sleep a bit before 10pm and sleeps all the way until 6-8AM. Of course last night I tried to put her down at 8pm or so which then resulted in lots of waking up until 11PM.

We've had the adventure of seeing the local pediatrician already which wasn't in my plan. The embassy NP is great and I didn't really have any motivation or desire to see a local doc. Unfortunately, Lilly seems to have inherited my milk allergy, so we were urged to connect with a local pediatrician given her symptoms and since the NP hadn't dealt with this problem before. So, one afternoon, Tristan and I went on an adventure to first find the pediatrician who has an office at Hospital Metropolitano. (next time we'll ask in advance about where the hell to park!) The doctor was perfectly fine--trained in the states and spoke excellent English, which I appreciated since I haven't mastered the vocab for childhood ailments. I would have liked to have seen a little more handwashing and glove usage. She did check Lillian out but didn't tell us much we didn't already know. She did seem think that Lilly's gastric distress could be caused by bacteria which doesn't seem the case to me. I think that's due to the fact that kids here tend to have more stuff in their gut than we do in the states. She should have started me on a food diary and asked more about what I was eating. I'm looking forward to going back to the states and seeing our pediatrician in Ballard and possibly an allergist there. Overall, not super impressed. She wants to see us again after another test. Still debating the usefullness of that. I called my lactation consultant, Emily Pease, in Seattle and she did a fantastic job of explaining the physiology of dairy allergies in infants and reassured me that I was probably headed down the right path.

Despite the persistent diaper rash and gastric distress, Lillian is a happy baby and seems to be gaining weight well. All this seems to worry me more than it does her. I've tried my best to cut out all milk products and might cut the soy as well later this week just to see if it helps. She was improving well until I ate a hamburger at TGIFriday's of all places that I suspect had some butter on the bun. I've started a food diary to see if I need to cut out the red meat as well or other protein sources. It's a little hard reading labels in Spanish but I figure it's better than Russian. I did finally figure out that the local peanut butter I was eating has milk powder in it so we picked up some Jiff at the Commissary.

Lilly's reaching and grabbing things that are close by. She loves her play-yard and can grab hold of the bugs that hang on it. She drools like crazy on me and anyone else who picks her up but usually compensates them with a smile.

Here's a few pics from the past few weeks 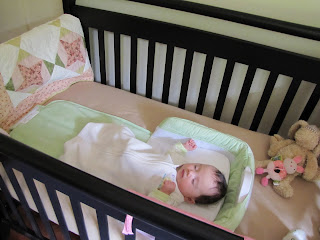 First nap in her big crib 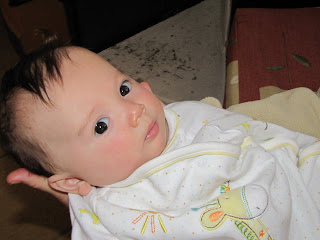 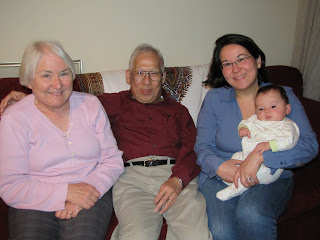 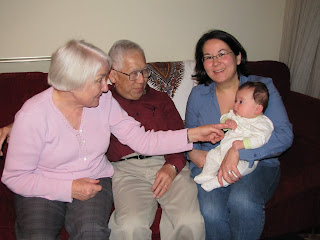 Getting to know Grandma & Grandpa Ho 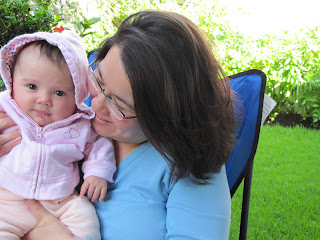 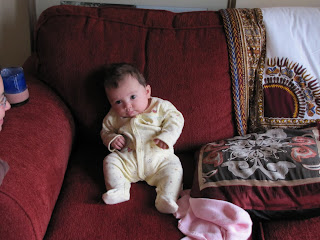 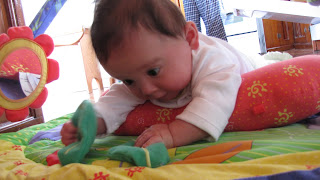 Posted by Carolyn and Tristan at 7:55 AM